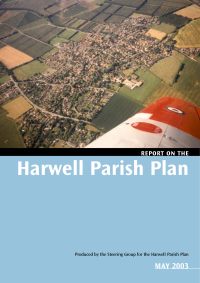 In August 2001 Councillor Margaret Turner proposed that a Village Appraisal be carried out. A public meeting was called to gauge whether there was sufficient interest in Harwell to go ahead. Many people turned out, and a Steering Group was formed.

Members of the Steering Group were made leaders of teams that investigated different subject headings. Their research identified the issues that were of most interest to the public and enabled appropriate questions to be developed for the questionnaire, which was a key vehicle for consultation. Over the following 18 months they:

The result is an authoritative statement of what the needs and aspirations of the people of Harwell parish are. The information to be found in this Parish Plan is the most reliable that can be found anywhere. This is because they consulted everybody in Harwell and because an overwhelming majority of those people (79%) responded to the questionnaire.

The end product is a template for the future of the parish.

Both documents are Adobe PDF Files; you may need an Adobe Reader

This site uses Akismet to reduce spam. Learn how your comment data is processed.

There is a separate website for pages and photos relating to the history of Harwell. www.village4a1000years.com That site contains the full text of the 1985 book “Village for a 1000 years“.